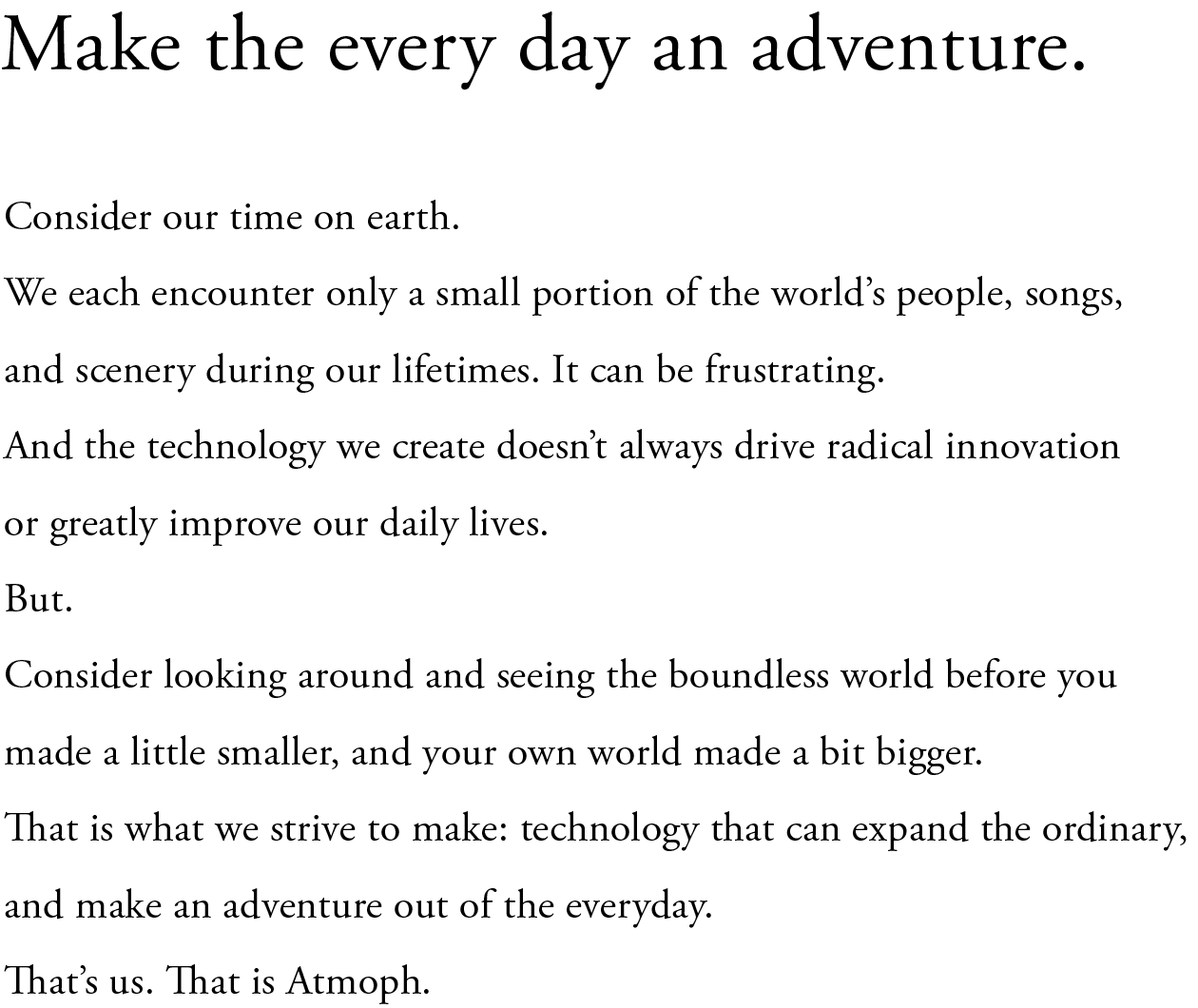 In 2004, co-founder Kyohi was living in an apartment in Los Angeles. Life was fun, but with learning a new language, living in a new country, and researching at his university lab, there was also a growing stress inside him.

At a certain point, he began to feel his apartment’s atmosphere was cramped and suffocating. There was no sense of openness, and looking out the window showed only the apartment building next door. To create a feeling of spaciousness, he tried things like changing his computer’s desktop to a photo of a tropical beach, or playing landscape DVDs, but nothing quite worked. Over the next ten years, Kyohi continued to think of ideas for how to solve this problem, and then it finally occurred to him, “We can’t change the view from our homes. But what if we could?” A product with the design of a window that simply hangs on the wall, which opens to landscapes from all over the world. A simple concept, yet at the time time, it would be a dream come true.

With that concept in mind, in 2014, Atmoph was founded in Kyoto, Japan, and Atmoph Window, the world’s first smart digital window, was created. At Atmoph, we are rethinking the way we connect with nature and technology.

Born in Tokyo, Kyohi worked at Nintendo on UI engineering for their game consoles' online services, after leading the User Interface Technology Department at NHN Japan. He earned a BS in Mechanical Engineering from Aoyama Gakuin Univeristy and a MS in Computer Science from the University of Southern California, studying robotics. A Brazilian music lover.

Kyohei started his career at Yahoo! Japan by building sports news servers. Later, at Mixi, he contributed to the development of online payment, photo sharing and music streaming services. And at Nintendo, he developed Nintendo eShop and content download servers for game consoles. He was qualified as the IPA MITOH Super Creator in 2008.

Yoko is a designer at Atmoph. She started her own design office in 2008 after working as a graphic designer for advertising and packaging at Saito Numajiri Design for seven years. She studied design at college in San Diego and the Fashion Institute of Technology in New York. In her spare time, she enjoys movies and spending time with her kids.

Misa lives in Tokyo. Traveled around Southeast Asian countries while in college, based in Singapore. Joined Atmoph in 2021 after working for a consulting firm, fashion, and entertainment company. She's the type of person who gets motivated in chaos and rather stressed out when she is not busy. Her happiness is working for creating the future. Her motto is "Carpe Diem" - "Seize the day".

Chikako majored in Communication Studies at California State University, Northridge. Through this experience, she became interested in connecting with people. She joined Atmoph in 2016 as a customer relations specialist and loves to communicate with our users from all over the world.

Hardware and software engineer Shin joined Nintendo in 2002, where he worked on the development of the game controller for the Wii. After going independent in 2016, he joined Atmoph to assist with hardware development. He has a special ability to find fallen gloves. His record for most gloves discovered in a year is 112.

Brazilian-born Japanese, Michael studied graphic design at university, after which he worked as a motion designer for various advertising companies in Brazil and the US. He speaks Portuguese, Japanese, and English. Michael joined Atmoph in 2018 as a UI/UX designer, specializing in motion design. In his free time, he enjoys riding his bicycle and taking pictures of Japan.

Tokinari has traveled to over 80 countries, being drawn to traveling abroad from his experiences living in several countries during his childhood. As with majoring English Culture Communication in university in Japan, working in sales at Atmoph has him excited to be delivering the world sceneries to a diversity of people. Tokinari joined Atmoph in 2018. He loves pizza, as well as other cuisine from all over the world.

After graduating graduating from Ritsumeikan University, she worked for a manufacturer in product development. She joined Atmoph in 2017 and is in charge of administration and accounting. She loves seeing Atmoph grow day by day, and being able to support the Atmoph team, with its diversity of nationalities and backgrounds, so everyone can go about their work with peace of mind. She has Level Two qualifications in the Kyoto Tourism Culture Certification, and enjoys history and the beauty of the four seasons.

Born in Nagano Prefecture, he worked for over ten years at Nintendo as a software engineer, developing game console OS and network services. Following this he helped develop IoT-based smart systems for agriculture at a rice farm in Nagano, delving into machinery and PCB design. In 2019 he jointed Atmoph as a hardware engineer. He loves scuba-diving, and has dived in oceans across the world.

After graduating from Osaka University of Arts, she gained experience producing wedding, promotional, and research videos. She joined Atmoph in 2019, where every day she works on Atmoph Window’s Views from across the world, in the hope they can brighten up the lives of as many people as possible. She loves filming the night sky, and on clear nights at the time of the new moon can be seen seeking out locations away from the city lights.

Taiwanese. He started working for Foxconn in 2015, where he headed mechanical design for the robot R&D team. After coming to Japan in 2016 for intense training in engineering, he was engaged in image-based machine learning and robot and mobile app R&D at an electronics manufacturing service provider. He joined Atmoph in 2019 to lead software R&D. He loves music, especially playing heavy metal on guitar and bass.

After graduating from postgraduate school at the University of Hyogo, he gained experience in corporate planing management and accounting for manufacturers etc.. He joined Atmoph in 2019, heading accounting systems in preparation for IPO. Atmoph’s can-do, thinking-outside-the-square style gives him inspiration on a daily basis. He loves ball games, and lately (after the World Cup in Japan) jumped on the rugby bandwagon. He would like to see a New Zealand haka performance in the flesh.

Atmoph Designer. Born in 1995. After graduating from Tohoku University of Art and Design in product development, entered an electric-appliance manufacturer and was involved in developing user interface design for apps. A fan of Atmoph’s product, he joined Atmoph in 2020. Nicknamed Mune-kun. Walks with a loose hunched gait, so friend’s liken him to a “yokai” (Japanese mythical creature). A foodie and a gadget geek.

Originally from China, worked in purchasing and production management in the fashion industry in Shanghai for 5 years. After graduating from Ritsumeikan University in 2018, she worked in the cosmetics and fashion industry before joining Atmoph in 2021, where she enjoys the global atmosphere, working globally, and the great people. Loves Jazz music and aromatherapy.

Mai lives in Aichi Prefecture. She previously worked as a member of an airport ground crew assisting customers with their travels. Mai is currently in charge of Customer Relations, handling Atmoph's customer inquiries from Japan and abroad. A lover of studying languages, she challenges herself when traveling to see how far she can go using the local language. Even when our languages are different, Mai feels that communication between humans doesn't change.

After working as a software engineer and an automative parts manufacturer, she spent a while trying out seven different places in Japan and abroad as potential places to live, experiencing for herself many different cultures. She ended up settling down in Kyoto, and found herself unexpectedly joining Atmoph as a software engineer after coincidentally participating in one of their fan club events and really relating to their product and philosophy. Her favorite motto is “better now than later”.

She holds a PhD from the Australian National University, and an MA from Tokyo University. She has experience writing, researching, and teaching as a university lecturer and over twenty years of translation/proofreading experience. She is also a contemporary artist, and has exhibited across Europe, Asia, America and Australia. She enjoys working with the Atmoph team especially for their international outlook and open-minded enthusiasm. She moonlights as an organic farmer in the mountains outside Kyoto city, and loves all things art and nature.

After graduating from Waseda University majoring in economics, Ikuma was qualified as a Certified Public Accountant. With experience at a consulting firm focusing on PMI operations for PE funds, he worked at Renoveru as CFO in charge of fund raising and IPO. Born in Aichi prefecture and grew up in Tokyo. He enjoys building Gundam plastic models with his kids.

Atmoph Window began as a crowdfunding project. Without the support of these super early birds, it would never have become a reality.
List of supporters

We are always looking for new ambitious and driven people, talk to us or check our available positions.

Join the conversation on our social media channels to stay up-to-date on our company and the best deals on Atmoph.